My dad has always made the best big and fluffy pancakes, but one thing’s for sure: He probably wouldn’t be down with this healthy green-colored vegan and gluten-free version, even though they taste just as good. (Look away, pops—it’ll be ok!) As a lover of the breakfast staple and matcha, I couldn’t resist combining the two into a mouth-watering treat that also just so happens to be full of benefits.

While regular pancakes don’t exactly do much for your body—they primarily consist of white flour, eggs, butter, and oil, after all—these babies are jam-packed with body-boosting ingredients. In fact, they’re so healthy you can make them any day of the week. The batter is essentially oats, spinach, banana, and soy milk—so like oatmeal, except in a much-tastier form!—which contains a solid amount of iron, calcium, vitamin A, vitamin C, vitamin B6, and fiber. As for the matcha, get ready: Full of antioxidants, the powdered green tea has been shown to protect against cancer and heart disease, and it energizes without the crash that comes with coffee. And another bonus I’m particularly fond of? It can also help calm anxiety thanks to L-theanine, the amino acid it contains.

How to get a quality matcha: I made the mistake of buying matcha from my grocery store, and it ended up being about 80% brown rice filler… aka a total health fail. Since labels can be deceiving and sometimes companies try to fool you into thinking you’re getting something pure when you’re not, make sure you’re buying from reputable retailers. I’m a fan of Mizuba Tea Co. and Encha, and even Trader Joe’s has a quality option available.

What to pair your pancakes with: Make yourself a batch of matcha pancakes topped with a dab of Earth Balance butter and maple syrup. Just make sure your syrup is vegan: I recently wrote about the topic on Well+Good, and surprisingly, not all varieties are animal-byproduct-free.

Print Recipe
Fluffy Vegan Matcha Pancakes
These vegan matcha pancakes are so healthy you can eat them every day. 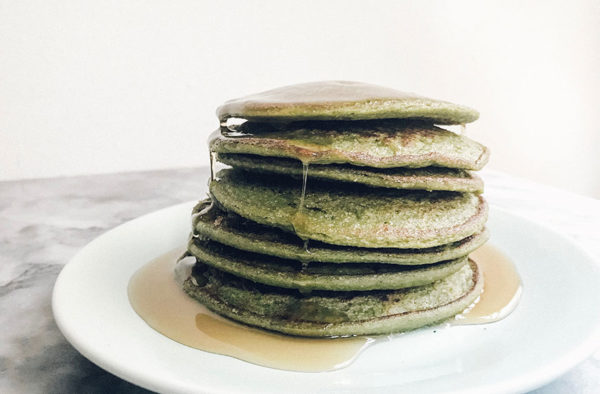 Ever since moving back to Iowa, I’ve been pleasantly surprised with how many vegan options there are here. Obviously I can’t just walk to Peacefood Cafe anymore (*insert tears here*), but hey—I’m a quick drive away from pizza with soy cheese and the Impossible Burger, and that’s fine by me. Plus, it’s safe to say I’m still nailing my version of the restaurant’s spicy Caesar dressing, so it’s basically like I’m there, right?

One of my favorite places I’ve eaten at in the area is actually Karma Coffee Cafe in Hiawatha—a small coffee shop that has a few really tasty vegan eats on the menu. Whenever I post up and work there, I always get a matcha latte and their summer rolls—both of which are completely to-die-for. Since I work from home most days, I decided to make some myself… and unlike the last time I tried working with rice paper (which was kind of like my first time with tofu), it was a total success.

While the restaurant uses what I’m guessing is a homemade sweet potato hummus, I subbed in some store-bought roasted red pepper hummus from Sabra until I have time to make their version myself. The rest of the ingredients are incredibly easy to prep, too: after a few minutes of chopping, you just have to assemble everything and you’re good to go.

Print Recipe
Hummus + Veggie Summer Rolls
A light, healthy, and delicious meal that only takes minutes to make. Double up the servings to prep lunch for the entire week. 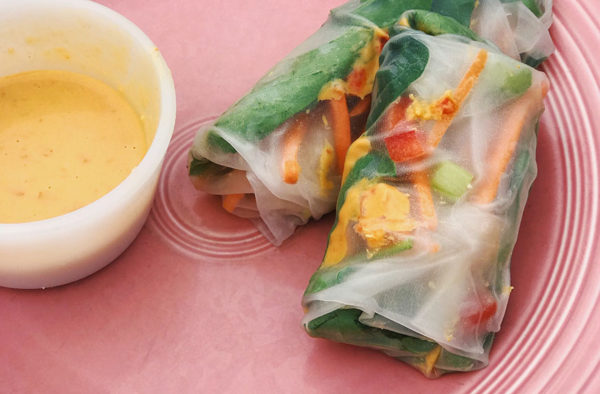 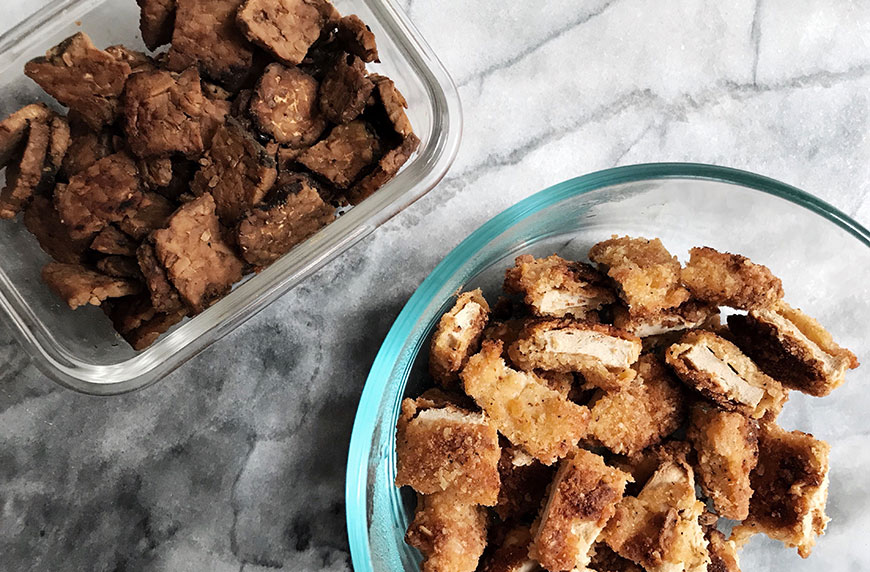 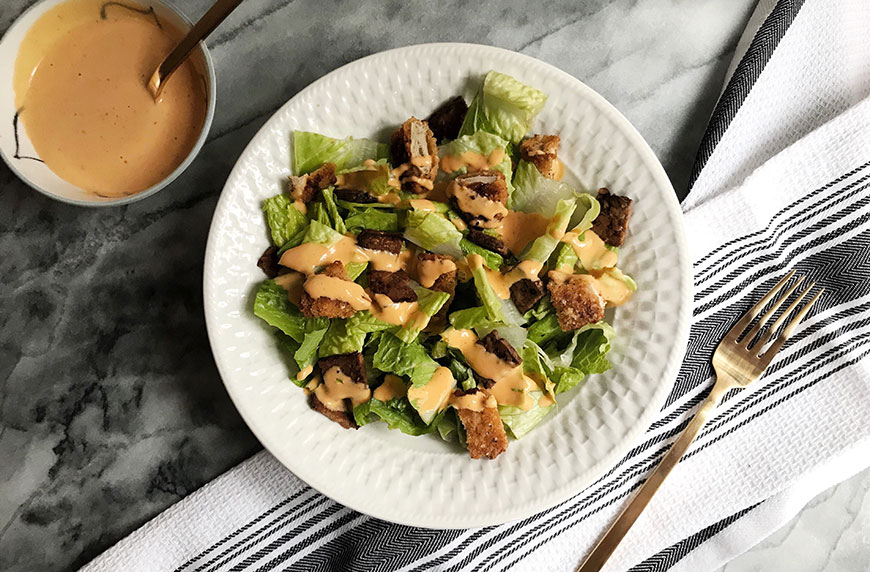 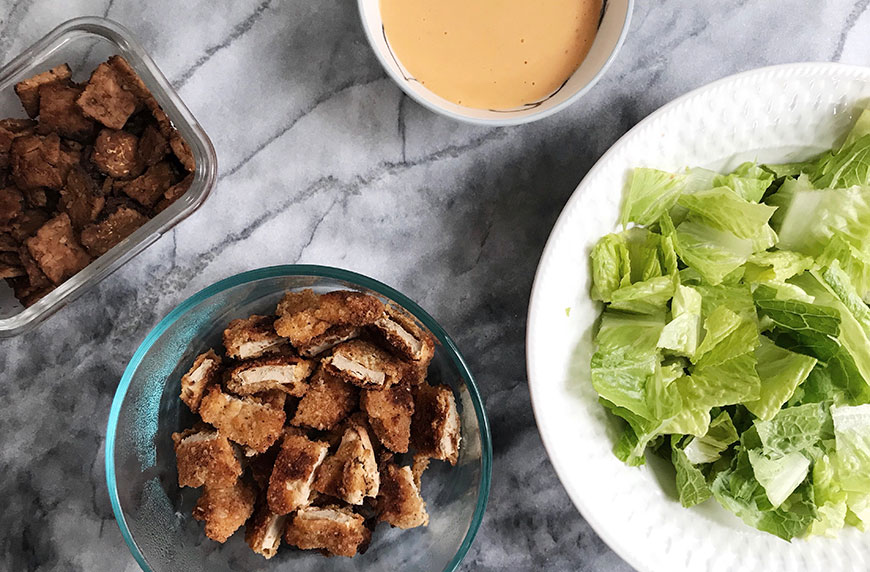 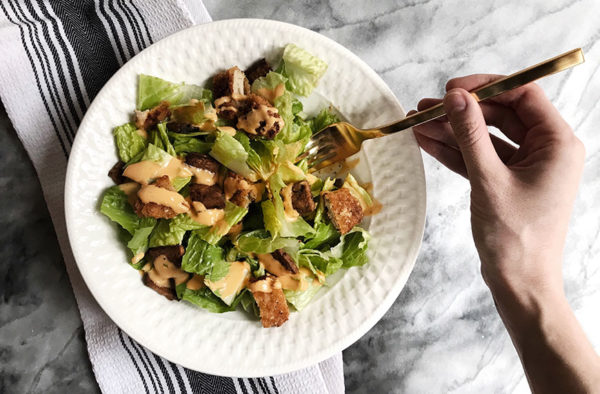 I love getting together with my bestie Hilary of The Greener Voyage and vegan food is always involved—but this time it was something we made ourselves! Which, to be honest, doesn’t happen often in tiny New York City apartment kitchens where there’s typically a one-person capacity. This time I headed out to her new place in Bushwick where there was plenty of space to whip up this delicious Strawberry-Beetroot Papaya Bowl recipe. 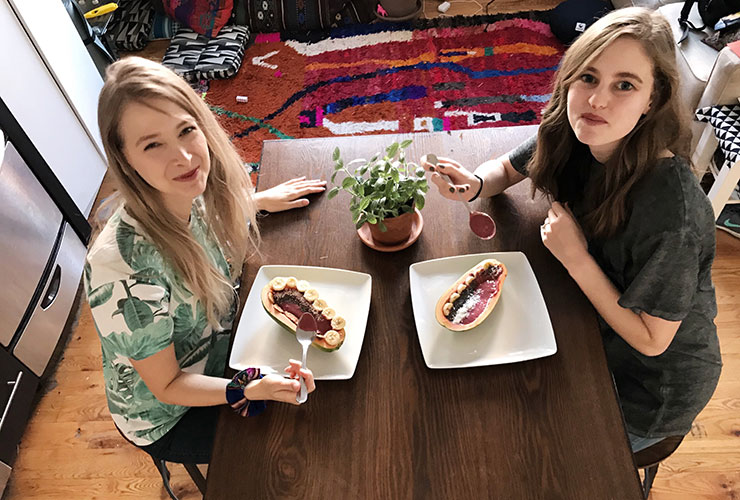 So, I’ve tried multiple different smoothie bowls in the past, but I’ve never found one I loved. Now don’t get me wrong: I’m a smoothie girl and love sipping on a fruit- and veggie-packed drink in the morning. Eating a smoothie out of a bowl with a spoon, though? It just feels… wrong. But something about putting it into a scooped-out papaya feels oh-so-right. 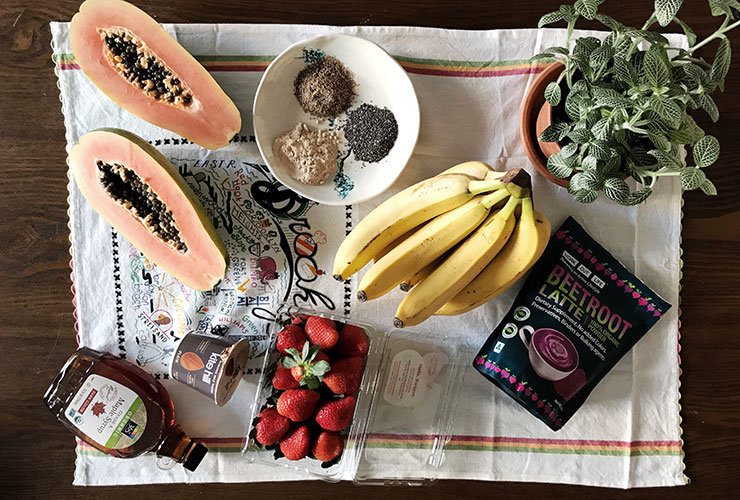 This smoothie bowl is jam-packed with good-for-you ingredients. Plus, it doesn’t feel soupy—it has a lot of oomph that will fuel you through your day thanks to some sneaky superfoods, including a gorgeous beetroot powder I’m a tiny bit obsessed with. So, what are you waiting for? Eat up! 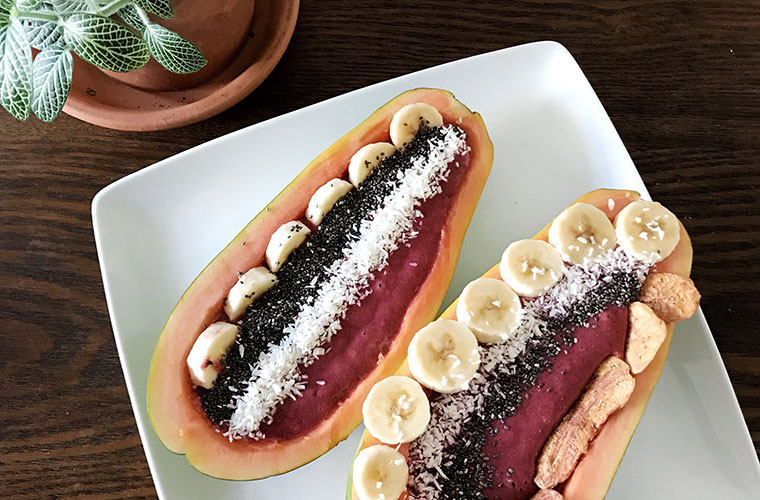 There are plenty of ways to make dairy-free mac and cheese—whether you’re using nuts or veggies—but most methods take up more time than I typically want to spend when I need to satisfy a serious, on-the-spot craving. That’s why this recipe I created on a whim one day when I was hangry is such a gem: It only requires four ingredients, can be made in just minutes, and is super creamy. What more could you want?

To make this 4-ingredient mac and cheese, you’ll just need soy milk, organic corn starch, nutritional yeast (which is jam-packed with vitamin B12—aka an amazing mood- and energy-booster), and some pasta. You can use whatever type of noodle your heart desires to make the dish, whether that’s actual macaroni or something totally different—like protein-packed fusilli made from quinoa flour, which just so happens to be what I had on hand. 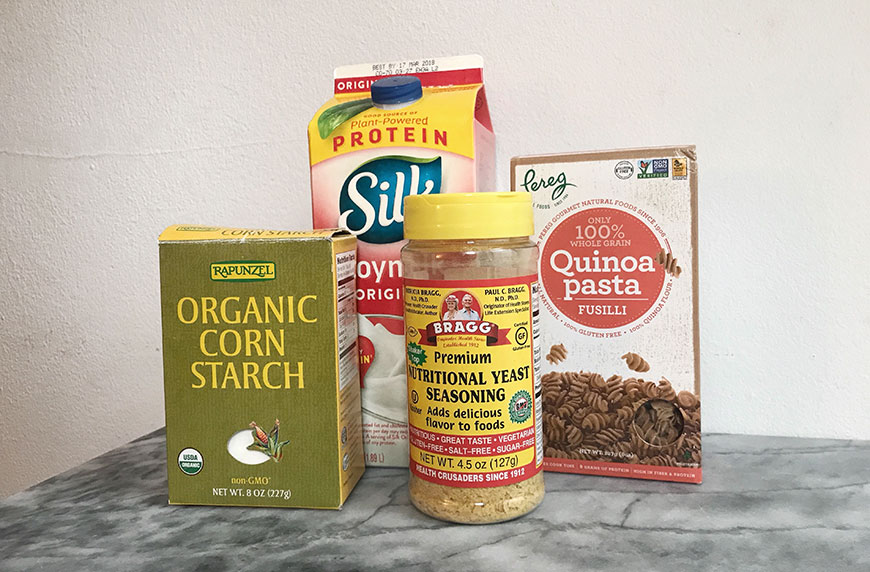 After rounding up your ingredients, all you need to do is cook up the noodles and make the sauce. Believe it or not, everything can be made in 5 or 6 minutes. Seriously. 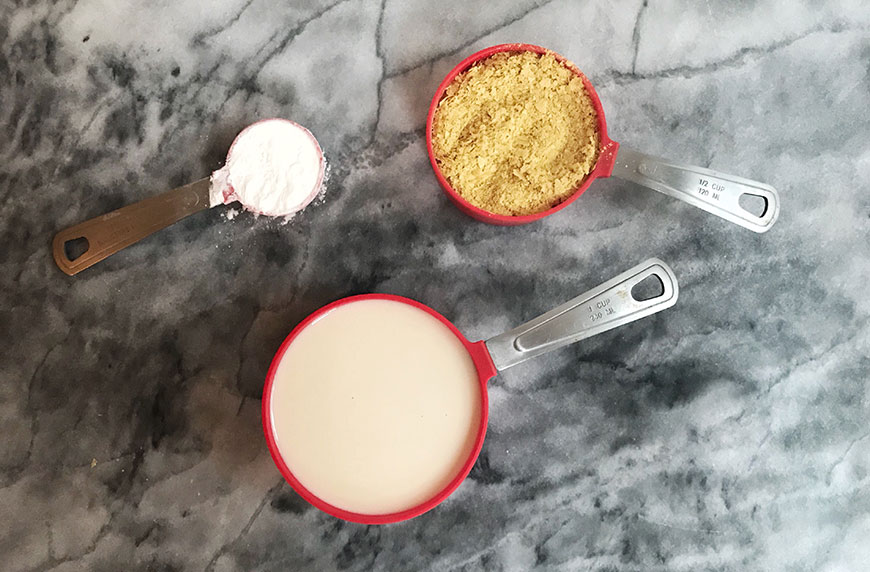 The best thing about this quick dish is that it’s great whether you’re vegan or not. If you don’t eat dairy, you have an easy option for lazy days—and if you typically eat dairy, it’s the perfect way to healthify one of your favorite comfort foods. Even my cheese-loving fiancé loves this meal, so that’s saying something.

Ready to eat? Check out the instructions below. And if you try it out, tag me in your pictures on Instagram: @tehrene. I’d love to see what you think! 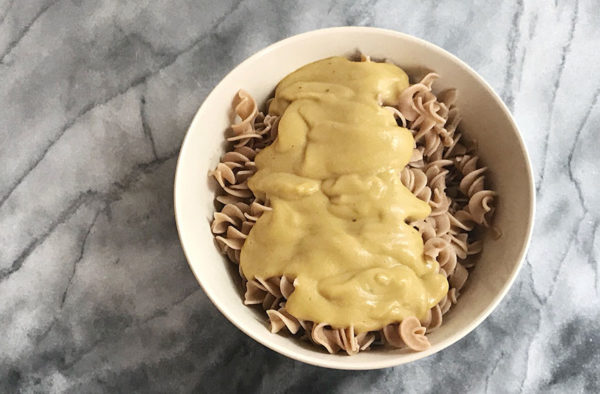